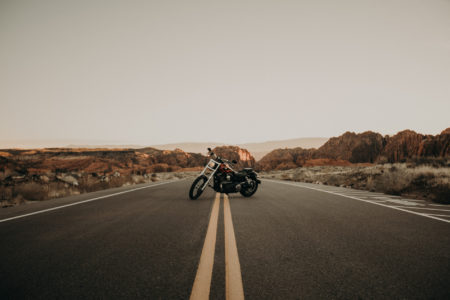 Have you ever been on the highway just driving along when *WHOOSH* down the white line comes a motorcycle? This is called white lining and it is ILLEGAL in NY and most other states. ‘

I was driving to PA last week and saw them on the white line multiple times.

I was telling a friend who rides motorcycles about it and he was adamant that this what not only legal but that it was also safe. This got me thinking 2 things. 1. There is no way this can be legal and 2. There is NO WAY this is safe.

If you want to learn more about driving safely take our online class!

So what is the law on riding the white line?

Conclusion: ·    It is apparent that Driver #1 could not judge the speed of V2 or didn’t see the motorcycle (V2) prior to the crash.

o  One possible explanation is the size-arrival effect in which smaller objects are perceived to arrive later than larger objects. That is, drivers may estimate the time to arrival of motorcycles to be later than cars because motorcycles are smaller. (Online Resource #7) o  This is also evident by the normal path V1 took when making a left turn from XXXXXXX towards the driveway of XXXXXXX, not yielding to V2.

·    Driver #2 was unable to apply maximum braking when he applied the brakes of his motorcycle, which is evident by the skidding of the rear and front tires. o  Maximum braking is the full application of both brakes without locking up either tire. ·    In this crash, Driver #2 locked up the rear tire and front tires before releasing the brakes, causing him to lose control of the motorcycle, subsequently crashing.   ·    V2 is equipped with a shut off switch for the ABS, which apparently was in the “off” position, evident by the skid marks on the roadway.

·    When a motorcycle rider is presented with an accident situation, proper use of front and rear brakes will produce the most effective stopping. Laying the bike down results in impact with pavement, total loss of control, and a longer stopping distance. (Online Resource #5)

·    Driver #2 separated from the motorcycle, resulting in the following:

o  The motorcycle fell onto its side and slid on the roadway, struck V1 and continued to slide until it came to final rest.

o  Driver #2 slid &/or tumbled on the roadway, subsequently striking the front right fender of V1.

·    The cause of death of Driver #2 was determined to be “multiple blunt force injuries”, as per the Westchester County Medical Examiner.  ·    Driver #2’s license was revoked and V2 was not registered or insured and should not have been traveling on a public highway.

As you can see it isn’t worth the time to ride the white line. Please don’t do it. Stay tuned to this blog spot for more motorcycle safety info and as always, DRIVE SAFE!

Click on the green box to take the class online