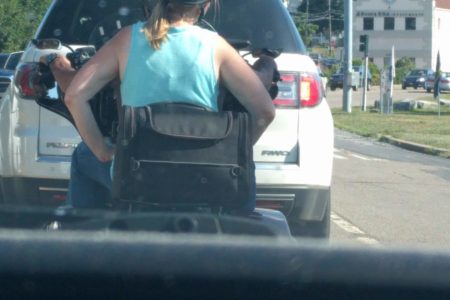 Motorcycle Riding in the Summer

It’s that time of year again, the sun is out and it is HOT. Yesterday I stopped at a light and  I noticed the couple in front of me on a motorcycle.  They had on helmets which is great for protecting your head. However, there are other parts of your body at risk if you […]

In fact, Some 34.4 million Americans driving this Independence Day weekend, and there’s probably a BBQ at the end of many of their trips. Last Fourth of July, Americans had around 74 million BBQs. They grilled an estimated 155 million hot dogs, and cracked open about 68 million cases of beer. In fact, more beer […]

Way Too Hot for Baby!

Today is a record breaking high for temps in NY.  It’s a whopping 95 in the shade in NYC , Hudson Valley and party of New Jersey.  It is HOT!!! Temperatures like this can be dangerous.  Yes they make for great days for the beach or by the pool or better yet hiding inside in […]

Rage in the Parking Lot: Assault Is A Crime

Road rage doesn’t just happen on the road.  It can happen in parking lots too! I’ve decided to call this parking lot rage.  It can happen for various reasons, can’t find a spot, pedestrians walking out in front of cars without looking, people driving too fast, 2 people thinking they both have “dibs” on a […]

Now is the time to start thinking about your Memorial Day Getaway Plans.  AAA projects that 41.5 million people will travel this weekend,and you could be one of them! This a 13-year high and nearly 5 percent more than last year.  Gas prices are at a four-year high, a nationwide average of $2.938 for a […]

Road Rage: When Emotions Take Over

Road rage is incredibly dangerous.  When emotions take over our driving the consequences can be dire. On Wednesday a man hit a fellow motorists car with a bat in an alleged road rage incident.   The incident took place on I-87 in Ramapo, NY.  Daniel Bosquez of Woodmere in Nassau County allegedly intentionally caused damage to […]

Nor’easter On the 1st Day of Spring!

Another Nor’easter set to barrel down on the Northeast over the next 2 days. And on the 1st day of Spring!  Depending where you are we will see anywhere from 6-15 inches of snow!  Flash flooding in coastal areas is also possible with this storm.  Want to learn more about driving in different weather conditions, […]

March 17th is almost upon us again.  According to legend, St. Patrick banished the snakes from Ireland. This St. Patrick’s Day, you can do an even greater service by helping  banish drunk driving from our roads. It’s that time of year where everyone is Irish! We eat corn beef and cabbage, wear green and drink […]

Who has the Right of Way?

Recently in the North East we have had 3 back to back snow storms.  These storms have knocked out power all over the place.  I was without power for 6 days and so was my town.  This got me thinking; who has the right of way during a black out? Want to learn more about […]

Car Commercials and The Big Game!

The Big Game is here, Super Bowl 52! Weather you are an Eagles or a Patriots fan we all LOVE the commercials! This year there will be fewer car commercials than in previous years. Data in on Super Bowl 51 suggested that automotive ad spending was on the decline for the first time in six […]

* Successful completion of 320-minute Internet course by principal operator of insured vehicle provides 3-year, 10% premium reduction in base rate of motorist’s current car liability, no-fault & collision premiums. Point reduction benefits can be applied once within 18 months and reduce as many as 4 points from record. *** Note that prices listed on this website are for the Internet course. Prices for classroom courses vary by location.